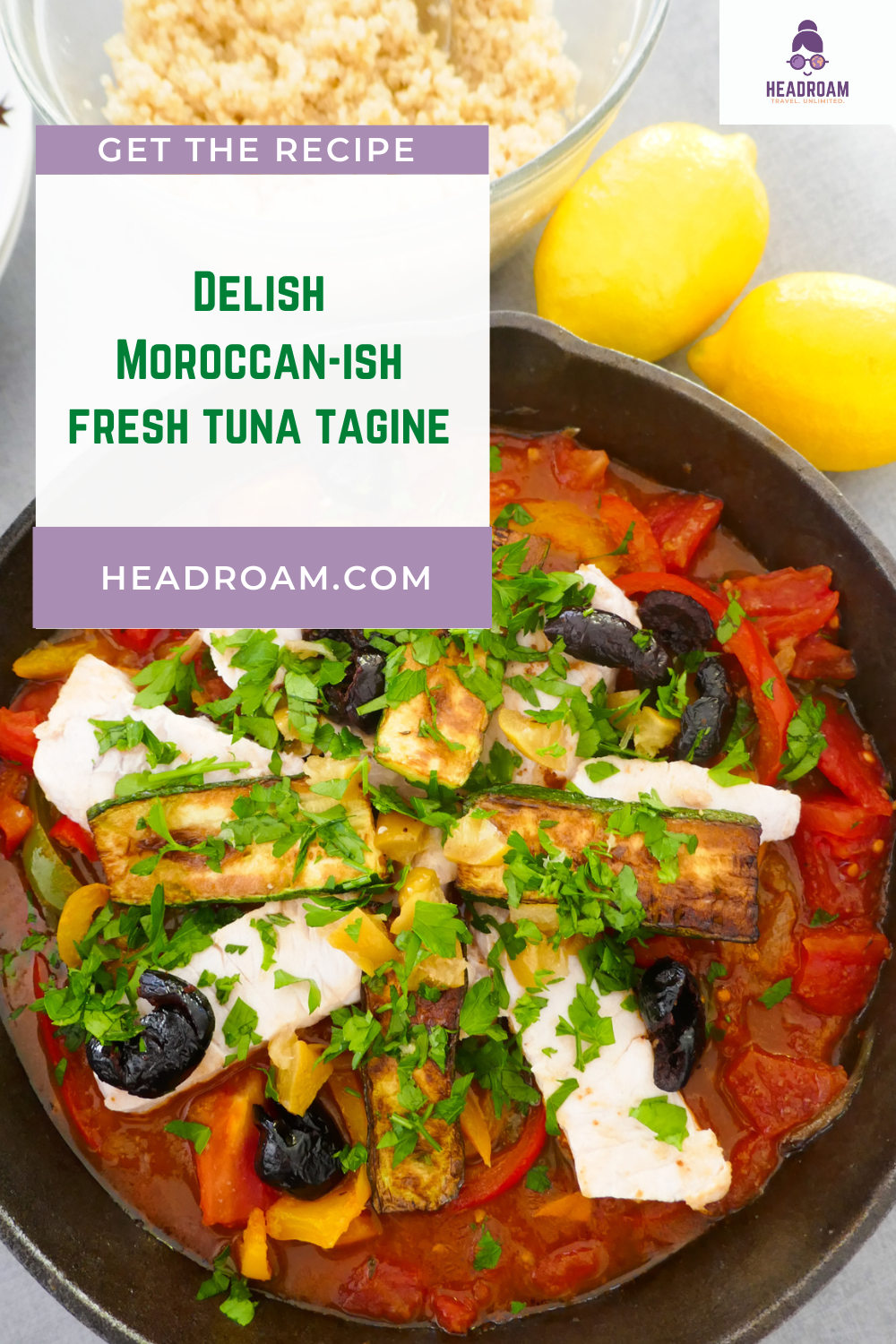 Tuna Tagine: Jump to the Recipe.

Bert Greene, originator of this recipe, is the first to admit that this is a Moroccan-ish Tuna Tagine, as opposed to a Moroccan one:

Fish tagines are part of every North African cook’s repertoire, but you will not find the next in any medina from one end of Tunis to the other.

Note that he mentions Tunis rather than Casablanca or Tangier, Morocco’s most famous coastal cities. The tagine is one of the great dishes to have emerged from North Africa, and while there are regional variations galore, the basic tagine concept is the same: meat, vegetables, and spices, all tenderly steamed to bring out the flavors of the areas gorgeous produce and delicate spices.

What I particularly like about this Tuna Tagine: It’s a powerful reminder that Morocco, Tunis, and Algeria has a lot of ocean waterfront, and therefore a lot of great fish. Good news for all of us less likely to eat a lamb or even chicken tagine.

…a good skillet with a lid works just fine, as you can see in the video. (By the way, the tagine above is solely for serving; I spotted this one at World Market.) Prep is easy; you just sauté things, more or less in the order recommended.

And while I’m typically not a huge fan of fresh tuna steak, I like the technique of searing off the outside, leaving the middle pretty raw, then finishing with a quick steam. I know a lot of folks who prefer the tuna completely raw, or seared on the outside and raw in the center. Of course, that’s up to you. For those who like their proteins definitely un-raw, this technique cooks it perfectly without overdoing it. This little movie, made with the Jumprope App that I am kind of crushing on right now, shows how to do it:

This is a fine choice if you want to do a Moroccan movie date. Enjoy with a wine glass filled with sparkling water laced with a little bit of rose water. 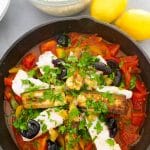 With its long coastline, Morocco serves up wonderful fresh fish dishes. This tajine offers a way to perfectly cook tuna and surround it with light and savory Moroccan flavors. Adapted from a recipe by Bert Greene in The Grains Cookbook.

1 and 1/2 teaspoons semolina or chickpea flour

1 small zucchini, cut in half lengthwise and then sliced vertically in 1/4-1/2 inch slices

Harissa or sriracha to taste

Prior to beginning the tagine, make your couscous or quinoa according to package directions. Keep the finished grain covered on the stove with the burner off to keep it warm, or place, covered, in a 200º oven.

Heat a skillet (cast iron is great if you have it) over medium-high heat. When hot, add 1 Tablespoon oil. When oil is hot, add onions and saute til beginning to brown, 3-4 minutes. Add peppers, and saute another 4 minutes. Add garlic and stir til fragrant.

Clear an area in the middle of the pan and sear off the tuna, no more than a minute per side. Remove to a plate. Do the same with the zucchini, adding more oil if needed; the zucchini will take a little longer to sear than the tuna, oddly enough. Remove that to the same plate.

Sprinkle the semolina or chickpea flour over the vegetables and stir til incorporated. Add the thyme, anchovy paste, tomato, and stir in, then pour in the broth. Heat to boiling, then lower to a hard simmer and cook 5 minutes. Add the seared tuna and zucchini to the top of the pan, cover, and turn off heat. Let rest for 5 minutes; the tuna will be perfectly done.

Stir butter and some of the chopped herbs into the couscous or quinoa. Place in a shallow bowl, and top with a portion of tagine. Garnish with more herbs, olives, preserved lemon, and harissa or (in a pinch) sriracha.

*Use any combo of bell peppers that you like: yellow, green, red, orange

**To peel the tomato, I use a fine bladed vegetable peeler. Moroccan cooks often grate the tomato, skin, seeds, and all, so that’s an option.

For an easy way to make couscous, see the Root Vegetable Tajine.

***Preserved lemons are available at World Market and in your local Middle Eastern grocery (often under the label “Pickled Lemons”). They’re easy to make at home (this video tells you how), but they also require a month of sitting time. I recommend you buy a jar to use while you wait for yours to cure. First, rinse the lemon well, then cut open and remove the seeds. Some people prefer to remove the interior part of the lemon, but I like to just chop up the whole thing once the seeds are out.